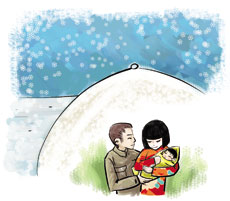 I have always wondered how much my mother's childhood was different from mine. She was born in China in 1960s and grew there. Since both her parents were engineers, she lived in a relatively rich family – her parents made about 250 RMB (Chinese Yuan) every month to feed the whole family, including three kids and her grandma. 250 Yuan RMB is equal to 30 US dollars today. But at that time in China, a regular meal for my mom’s family only cost 1 Yuan or so. The monthly rent for the house they were living in was less than 5 Yuan.

Heilongjiang Province is in the far northern area of China and might be the coldest place in the country.(地图) My mother was born there on a cold winter day. The place was neither her mother nor father’s hometown. Around that time, a big oil field was found there, so both of my mother’s parents were sent there to set up drilling wells. Life there was very tough. They worked and lived in the wild with no buildings or houses around, so the couple and their newborn baby had to live in a tent.(插图：寒冷的冬天，冰雪中，一对年轻夫妇和一个婴儿住在帐篷里)

Not long after my mother was born, her parents had to send her and her older brother to a village in Hebei Province, which is my grandma’s hometown. Their grandparents were very old so they could not take care of them much at all. One time, she went out with her brother to go ice-skating on the surface of a frozen pond. Her brother boarded a small wooden board and wanted to slide across the ice. Since my mother was too small, she could only run behind him. Soon she was getting quite tired, so she stopped and bowed her head down to take a breath. When she looked up, her brother had disappeared! Soon a crowd of people gathered around a hole in the ice. “Your brother fell into a hole!” they yelled.

After hearing this, my mother quickly ran back to her house to tell her family members what happened. When they rushed back to the scene, she found that her brother had already climbed out of the hole with the help of the villagers.

A few months later, she was sent back to her parents, but her brother had to stay here for a lot longer – the next time they would meet would be four years later! My mother’s last memory about the village was when the bus started to move, she saw her brother riding on a goat chasing the bus. My mother couldn’t stop giggling as she watched him get smaller and smaller, and then disappear.

During the Cultural Revolution, my grandparents were moved to Szechwan. My mother was about five years old during this time and was sent to Beijing to live with her aunt’s family. The most unforgettable memory she has from this period is when she took a train back to Szechaun to visit her parents. It was a three day ride on a crowded cabin with nobody she knew accompanying her. There was absolutely no way that a little girl like her would get a seat, so my mother brought a small stool. She sat on that stool for the whole ride and hummed the tunes of all popular songs she knew over and over to let the time lapse. The distance she had to ride was about the same as from New York to Texas! 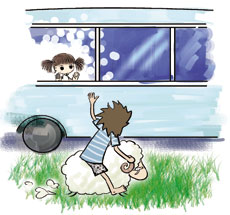 Now my mom was ready to go to kindergarten. This was when her personality really caught people’s attention. Every week, she would go to school for six days. Every two weeks, the teacher gave the kids baths by placing them in a big bowl of warm water one by one. After every five or six students bathed, the teachers got a new bowl of water. The students stood in a line and waited for their turn to bath. My mother just couldn’t bear used water touching her skin. Each time, she counted to see whether or not she was going to get a new bowl of water. If she got the clean water, she behaved really well and waited her turn patiently. However, if she found that she was going to be put into the water that was used already, she would break the rule and jump into the bowl as soon as the teacher changed the water, with her clothes on. (插图：穿着毛线衣裤的小女孩跳进圆形的木制浴盆里，旁边是规规矩矩排着队、满脸惊讶的小朋友们)She didn't even take her clothes off! Still, my mother was satisfied since the teacher couldn’t drag her out! It was way too cold to stand in wet clothes.

At seven years old, my mother went second grade and she did very well academically. She got good test scores and always got rewards at home because of getting better grades than her older brother and younger sister. (插图：小女孩拿着100分的数学和语文卷子给爸爸妈妈看；爸妈欢喜)There are times when my mother made some mistakes and didn't do well on her tests. Her parents were always glad to see that she told them the truth rather than hide it. Under the same circumstances, her brother would lie to avoid any punishments.

My mother was a little bit like a teacher’s pet. When she was having a dispute with another student and they decided to go up to the teacher, the teacher always blamed the other student first. Though I am not sure if this was the right thing to do, my mother took advantage of her teacher’s prejudice.

Sometimes, my mother helped her classmates do their homework and they repaid her with little things such as rulers, pencils, pencil cases, and other school supplies. She hardly ever had to buy any of these materials. All of her classmates asked her for help because they all knew that she was the smartest student.

During that time, children had to walk to school and most of them ate their breakfast on the way. My mother always had a loaf of bread that most families couldn’t afford then. For some reason, my mother didn’t really like those loaves of bread. She decided to exchange her bread for her classmates’ homemade cornbread. Both sides were so happy for getting what they really liked! (插图：两个女孩交换食物，小女孩用面包换取玉米饼，两个人均欢天喜地的样子)

Back then, you didn’t just go into a supermarket, pick out the food you like, and pay for it. Since the supply of meat and vegetables was very limited, each family got a few tickets to use to buy food. You have to wait in a long line. On the days before Chinese New Years, she had to wake up at 6:00 a.m. and wait until 8:00 a.m. when the store opened. She was young and short so once the doors were open, everybody squeezed in front of her. She didn’t want to go back home empty-handed because then they would have nothing to eat on Chinese New Year! So she thought as hard as she could. My mother decided to crawl and go underneath everybody’s legs. Before she knew it, she was at the front of the line.

From that moment on, she never came to wait in line early in the morning. She would go there at 8:00 a.m., crawl her way through and then buy the food! Just like she said, there turned out to be absolutely no point in coming early!

When she told me this, I thought it was extremely dangerous. What if somebody had accidentally stepped on her? 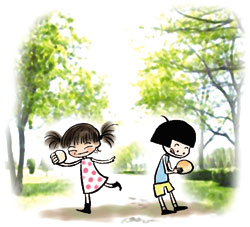 After a while, my mother went to Hebei with her sister to visit her grandmother. During the first few nights they were there, storms roared outside. They couldn’t even go outside. One night, when my mother and her sister went to the bathroom, the lights suddenly went off. On their way to alarm their family members, the house started shaking fiercely. It was still raining hard outside and the two girls were shivering with fear. My mother told her sister to run outside and wait for them. “Earthquake, earthquake!” she screamed.

All the people in the house got up and started running out. But before my mother left, she wailed “My grandma!” She went to her grandmother’s room and pulled her out of her bed. Just as they ran out of the room, the blank wall in front of them collapsed. (插图：女孩将外婆从床上拉起来，含泪的脸上有恐惧，身后是打碎的器皿、倒塌的家具和墙)

It was definitely not fun living outside. They had no shelter, so they used the logs and branches from the trees that had fallen down to built a small shed. They had no clothing or food so they were just in misery, not knowing what to do. Later on, helicopters flew by and dropped down food and clothing. Some people decided to go back inside to get valuables back but the earthquake kept erupting and some of them got stuck inside. Her family was lucky and got lots of belongings without getting killed inside so they lived a little happier in their little shed. My mother and her sister actually said that they enjoyed living in the shed. They got to sleep on the top of the shed!

After a long time, some villagers were still telling the story about a little girl had saved her grandma seconds before the house collapsing. This happened in July of 1976 and Hebei Province - My mother was in the heart of the place where the biggest recordable earthquake in the history of China was happening that killed about quarter million people and ruined a big city called Tang Shan. (插图：小女孩和两个小伙伴在临时搭建的防震棚顶上快乐地仰望星空)

My mother had a rough life in her early years. At the age when we are playing Barbie, humming Hilary Duff, and sobbing for just getting a bad test score, she was confronting real life and death challenges.

I always wonder now when she recalls this, she does not feel much sadness anymore. It seems that she diluted the bitterness of her past and only chewed the sweetness of what was left over. All in all, I like her childhood stories far more than just regular bedtime stories.